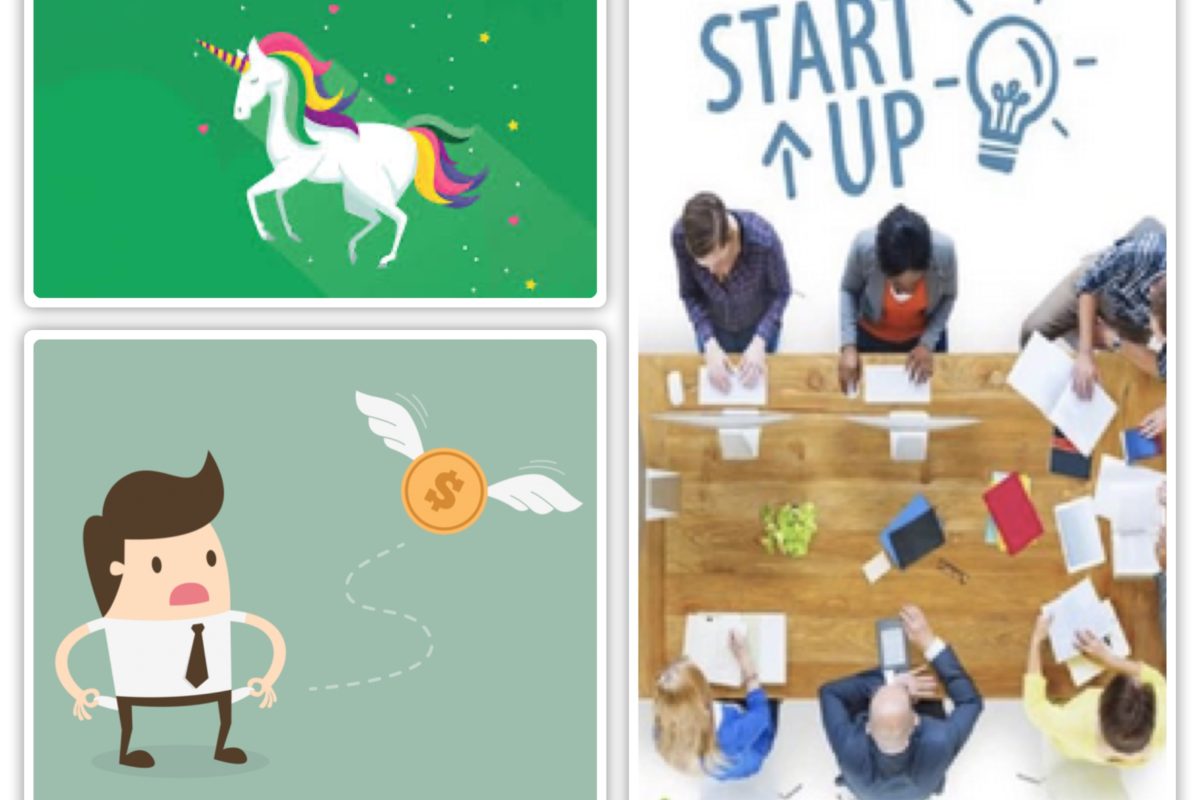 I was happy to be invited to a small-format dinner for startup founders and a few VCs last week. The ostensible goal was to discuss trends, lessons learned over the past year and challenges currently being faced. It turned out to be less upbeat evening than I had anticipated BUT I learned a lot about the state of startups as we head into 2020.

I’ve been to a variety of these dinners over the years – always fascinating to meet the movers and shakers of the startup world and see the future through their eyes. This dinner, however, felt different. The vibe I picked up was of worry and a sense of opportunities slipping away. WeWork hung over us like a black cloud. There was very little optimism about “exit strategies.” The days of easy unicorning appear to be over. I felt like I was witnessing the end of an era. The WeWork debacle was the tipping point but just the tip of the iceberg of what is yet to come (see Casper, MedMen and Knotel below).

Scroll down for a few of the recurring themes.

END_OF_DOCUMENT_TOKEN_TO_BE_REPLACED 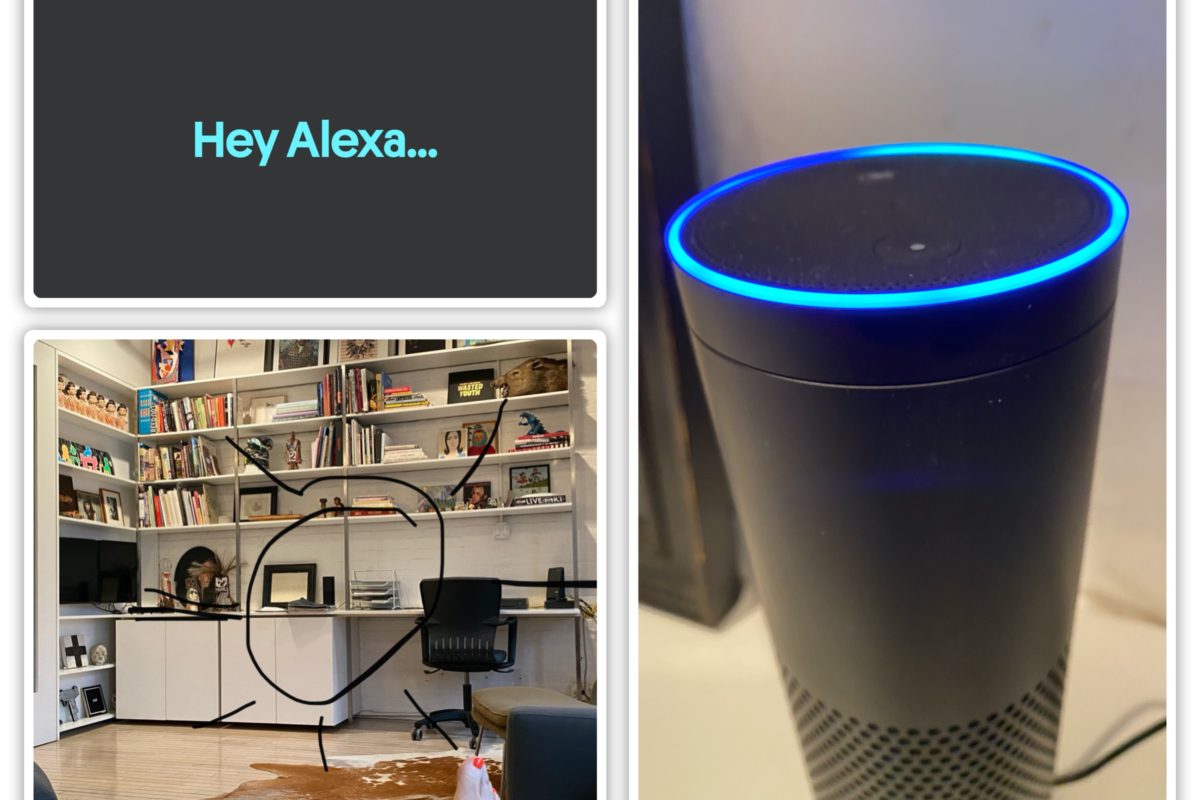 Anybody else notice their Alexa saying/doing weird stuff recently?

I use Alexa almost daily to play music. And the three performers I ask her to play most often are k.d. lang, Leonard Cohen and Sade. Each of these artists has a playlist that runs several hours.

Lately, Alexa seems to have checked out while she’s gigging at my house. She’s definitely not paying attention to tasks she’s performing. She doesn’t even know when the music is playing and when it’s not.

For example, EVERY time the music (that has been playing for several hours), finishes, Alexa now says:

Huh? But the music was playing up until a second ago. How can this high-tech device not know this?

And then there are the mix-ups with certain artists

Again this is a new snafu. Of late, when I ask Alexa to play Sade, invariably she tosses in various other artists who are nothing like Sade, e.g., Macy Gray or Teresa Cooper. The latter is a total unknown from the country music world. This only started happening within the last few weeks.

A friend from the digital music world told me this is Amazon’s way of strong-arming me to sign up for a higher tier of service (vs. just using Prime).

And finally, Alexa isn’t up-to-date on this whole pronoun thing

In writing this – and referring to Alexa as “her” – I thought it only appropriate to ask her what her pronoun was. She was nonplussed and proceeded to tell me what a pronoun is and how to use in a sentence. I’m not sure if I’m disappointed or happy that Alexa wasn’t more “evolved” in this regard.

I know Jeff has had a lot of distractions lately but I wish he’d pay a little more attention to our virtual assistant and her work habits. This going rogue thing is the first step to getting fired.

END_OF_DOCUMENT_TOKEN_TO_BE_REPLACED 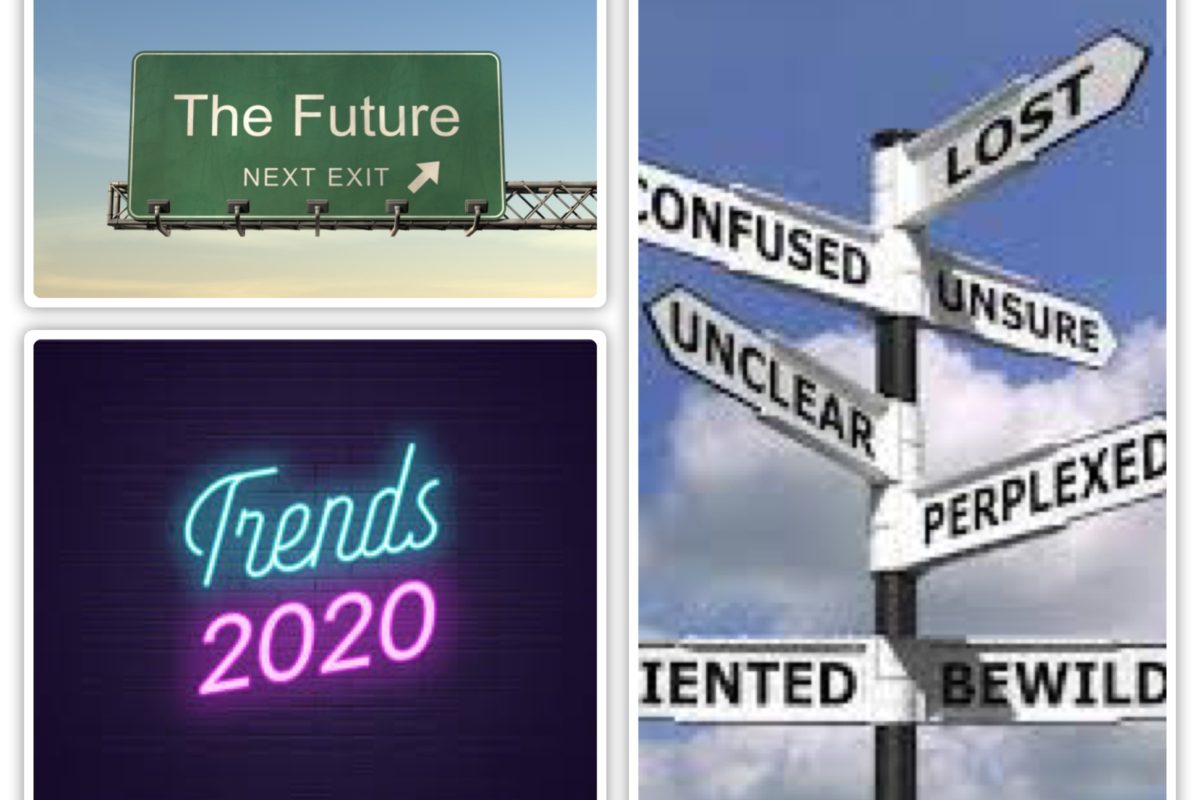 What a crazy decade it’s been, right? And as we head into 2020, all I can say is buckle up because it’s only going to get weirder. And while this post is NOT meant to offer any kind of all-inclusive list of trends, I do believe that every topic I have included will impact our lives in the future. One thing I am absolutely certain of: change is inevitable and it’s coming at us faster than ever, mostly because of technology and the power of social media.

My criteria for what to include (or not) in this “next decade” post is based on the work I’ve been doing with trends and culture shifts for the Opinionator since its founding in 2014. It’s been extremely helpful to see which themes have gradually become more prominent, what topics have received the most comments and shares, and, importantly, what countertrends are developing as we become a more pluralistic, multi-track society. Like it or not, we are increasingly moving away from being ONE nation and instead we’re seeking out “our” tribes among the myriad of micro-communities that have sprung up around us.

Scroll down now to begin this journey into the future!

END_OF_DOCUMENT_TOKEN_TO_BE_REPLACED 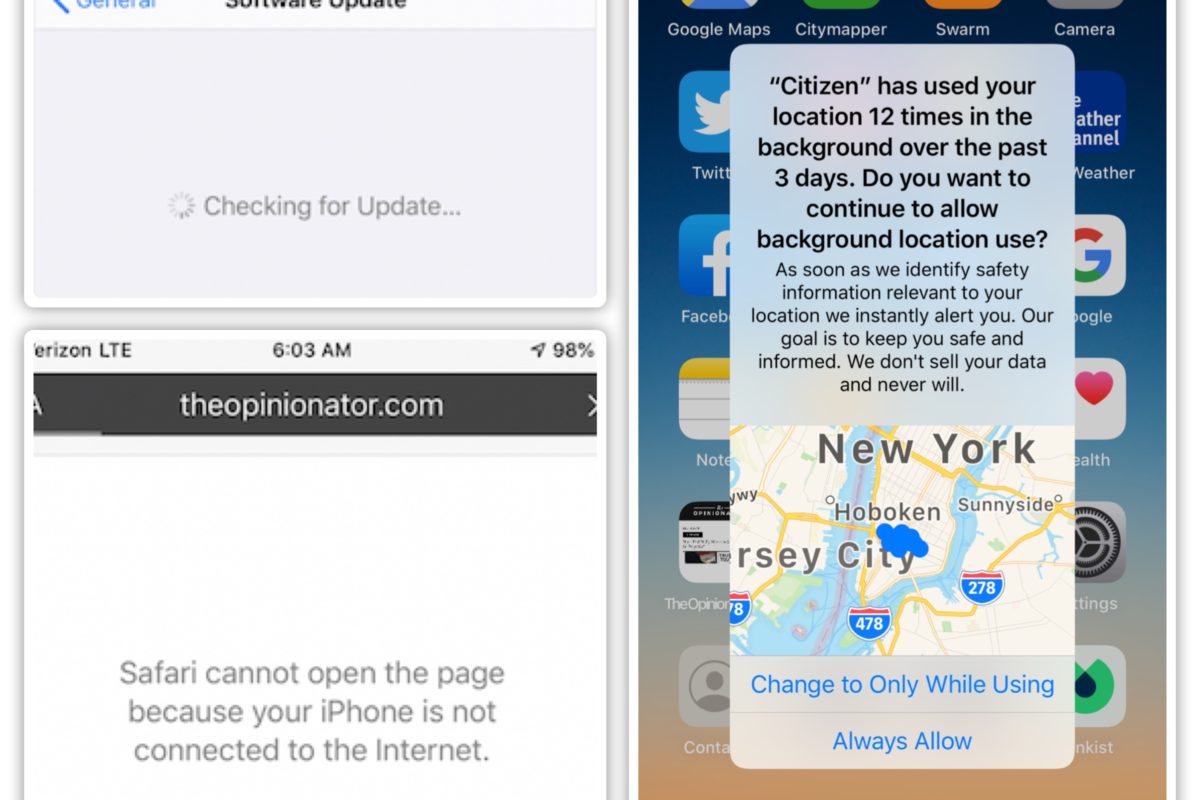 FYI: There will be no posts for the next few days. I am working on a major trend piece for the new decade titled “Looking Back To Look Forward.” I’ll be reviewing trends and culture shifts from the last five years to see what they hint at for the upcoming decade.

Now back to why my new iPhone is the worst

Where do I even start?

I’ve never had an iPhone that is so glitchy and keeps lagging and freezing. Most annoying is that this bad boy of a phone generally works perfectly well every time I complain about it while standing next to my tech guru, Jamie Dwyer! Isn’t that just maddening?

Overall, the worst thing is how SLOW the phone is, e.g., I just went on settings to check my software updates. It took a full 2 minutes of spinning to finally tell me that my software was up to date (pic upper left).

Additionally, my previous iPhone 7 would automatically switch to LTE if wifi was not available. Not so with iPhone 11 – I get messages galore about needing to be on wifi for it to work. And then refusing to let me get on LTE.

Apps are also taking an inordinate amount of time to open. I feel like I’ve gone back 20 years in terms of speed and efficiency.

All the issues (below) are minor when taken individually but in totality, they make for an extremely frustrating experience:

It’s as though this phone is trying to be my meditation teacher – it wants me to slow way down.

And when it’s not getting me to slow down, it just nags me.

If my phone were a person, I would steer clear.

The only good thing about the phone is the battery. It never runs out and it also recharges phenomenally fast. Beyond that, it’s a glitchy, slow mess. Being an Apple customer is becoming tiresome.

Tim Cook, are you listening? I know you can do better than this.

And that’s it until later this week when I’m back with trends and other predictions for the upcoming decade.

END_OF_DOCUMENT_TOKEN_TO_BE_REPLACED 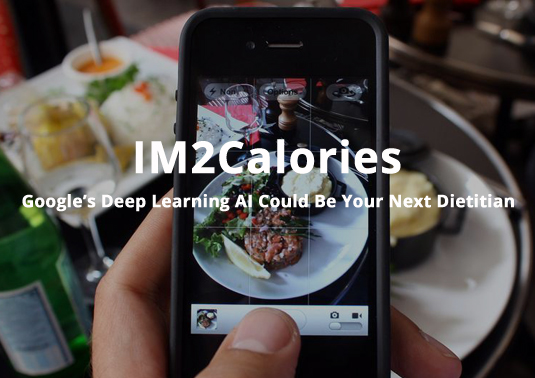 What happened to this Google IM2 Calories app that was being hyped back in 2015? Is it too hard to develop an app that would let me wave my phone over any food and get an accurate calorie count based on portion size and type of food? Or is there not enough interest?

I had such high hopes for the Google calorie app but there’s not been a peep about it since 2015. And, of course, I understand that this is a complex problem but c’mon I was counting on Google to come through for me.

In the meantime, I’ve read so much conflicting information about whether people actually change their eating behavior based on nutrition labels and calorie information.

Surprisingly (for me), study after study indicates that even after seeing calorie information listed at restaurants or on food labeling, people are NOT changing their eating behavior.

But, while “most” people may not alter their behavior, I know I have.

Here are some recent changes I made based on seeing the calorie count.

Now I’m working on having Ludlow House let me see the calorie count for their insanely tempting (and free) candy bar. Every time I work there for a 4 or 5 day stretch, my weight fluctuates and I know it has to do with my lack of willpower around that candy. Ugh.

END_OF_DOCUMENT_TOKEN_TO_BE_REPLACED 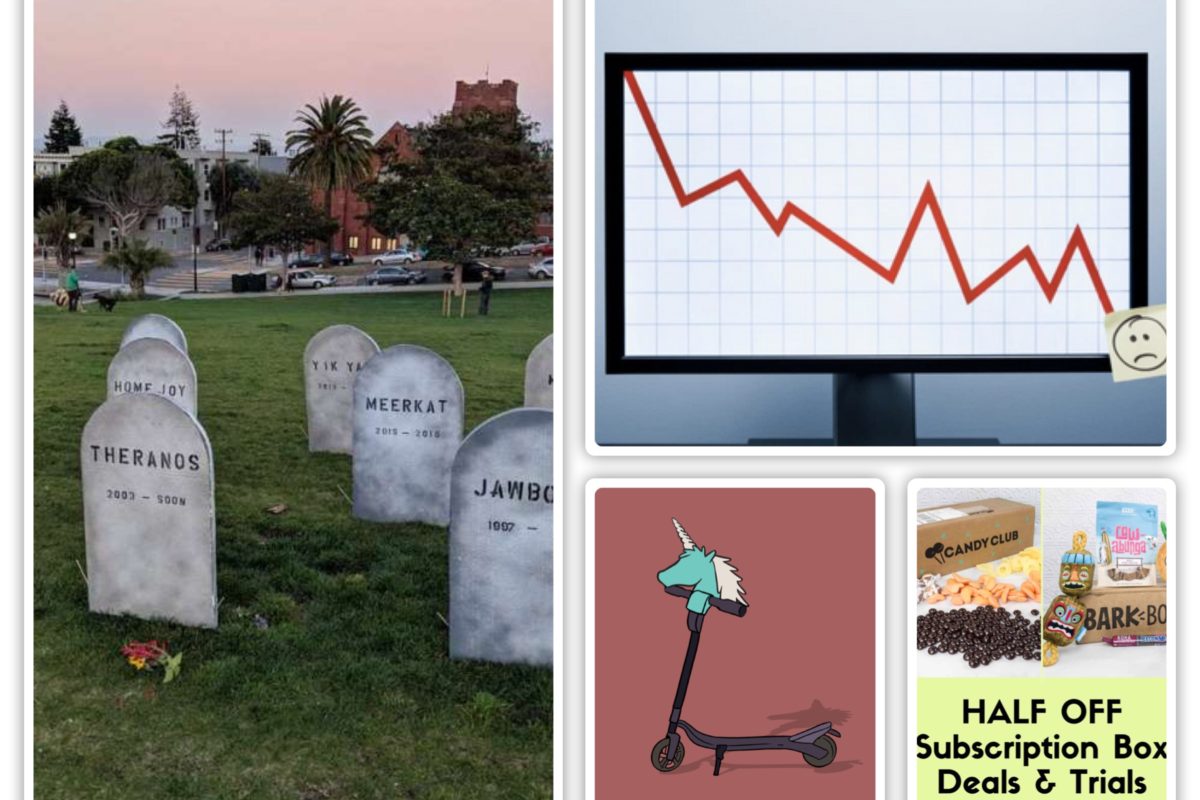 The WeWork debacle has served as a wake-up call to VCs and other investors. Charismatic founders, ersatz-tech startups, easy to copy apps and ridiculous claims of disruption are now major red flags.

And I must admit, somewhat ashamedly, that I am experiencing just a teensy bit of schadenfreude to see the most nonsensical (and scammy) of these startups finally getting their comeuppance.

Scroll down for more.

END_OF_DOCUMENT_TOKEN_TO_BE_REPLACED 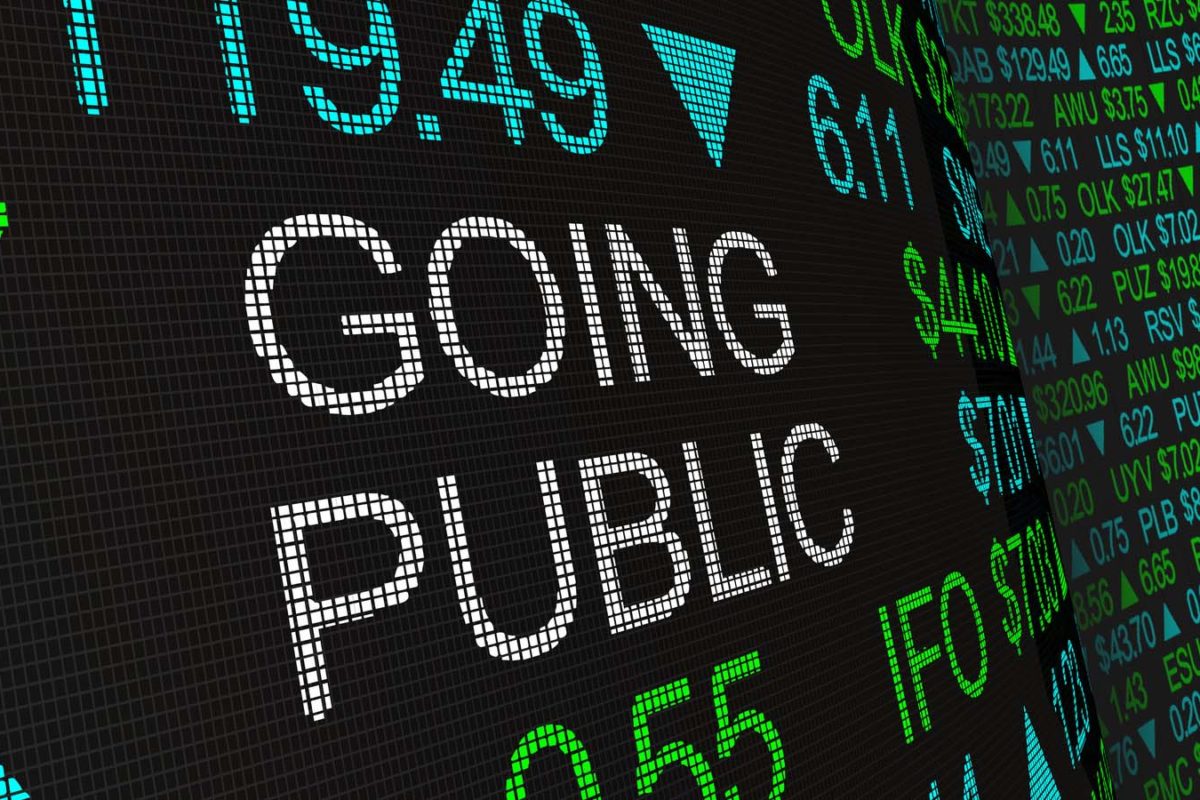 I previously wrote about this in May 2018 (Sh*t Just Got Real. Tech Bubble In Meltdown). It’s worth a re-read because it’s doubly true now.

Over the course of the last year, there been an inordinate number of half-baked startups being launched or preparing IPO. Notables include WeWork, Uber, Wag, Peloton, Blue Apron, and e-scooter companies Lime and Bird.

What has become abundantly clear is that while having the right technology is an important part of the equation, it’s not enough on its own.

And that’s especially true for on-demand services where reliable, trustworthy people are crucial for success. What many startups are discovering is that finding those people in a economy (that they’ve helped to create) is nigh impossible.

What’s also clear is that many startups have not made one red cent and are nowhere near being profitable. It hasn’t been a priority – and why should it be when no matter how much money you lose, more money gets tossed your way?

Too many consumer-tech companies nearing their public offerings are selling magic shows at a science fair.

The startup business model is no longer about bootstrapping. It’s all about creating high-level hype around a disruptive idea. And if a charismatic founder is involved, all the better. It makes raising stupid amounts of VC money easy as pie.

Surprisingly, it’s only been twelve years since this craziness started.

I date it to the iPhone launch in 2007 when apps first became a thing.

Two years later, in 2009, s app-based, on-demand service launched and we were off to the races. After that, every startup wanted to be the Uber of or the Uber of that.

Gradually, the disappointments started to pile up.

Over the last two years, Silicon Valley and its unicorns started to feel toxic, especially post-election. They have yet to recover.

So here we are in 2019 and it’s fair to say “the bloom is off the rose” and “the chickens are coming home to roost.”

Read on below for the two biggest challenges facing tech startups today.

END_OF_DOCUMENT_TOKEN_TO_BE_REPLACED 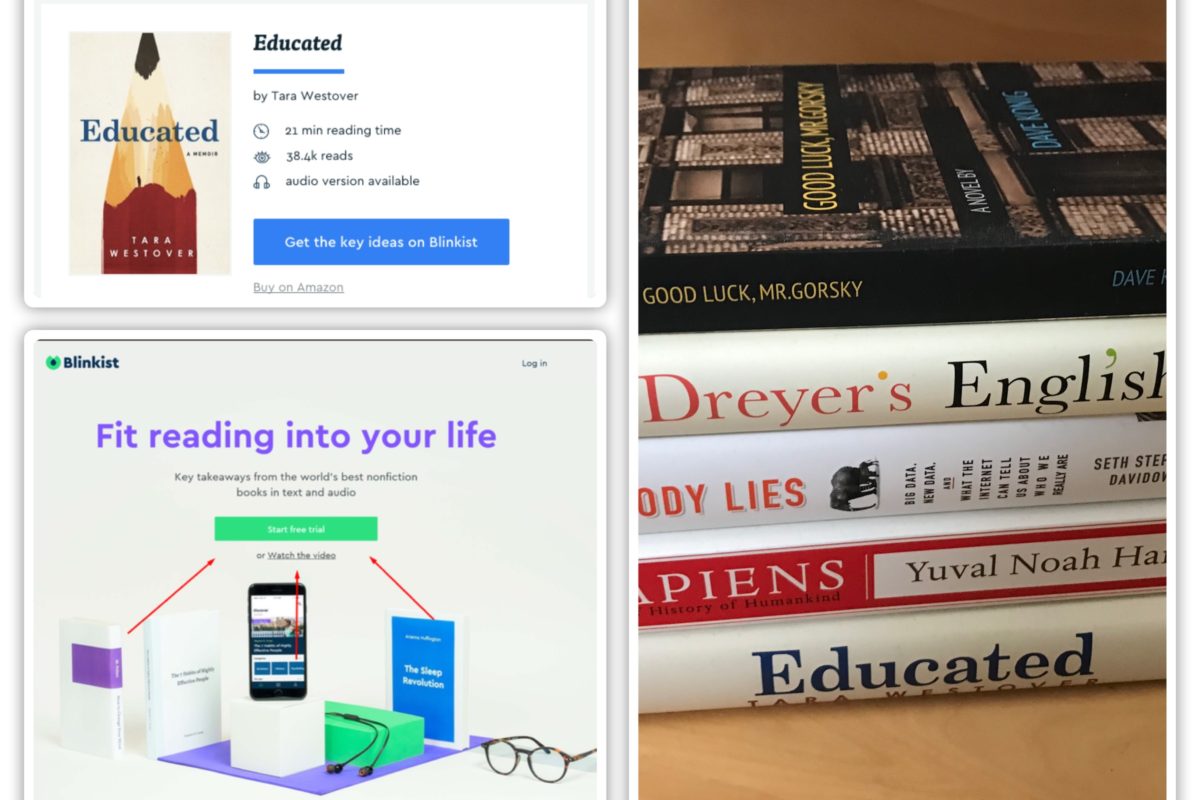 I’ve always been an avid reader but lately, I have absolutely no desire to crack open a book. It’s driving me crazy!

And that’s why I got so intrigued by Blinkist, the professional book summary service. It’s a German startup that has raised over $35MM and is positioned for curious learners who want to read more but have a hectic schedule with limited time. Or, as in my case, too many distractions to dedicate endless hours to books.

The last book I read and absolutely loved was Tribe Of Mentors – and that was in 2017. That year I read a book a month. Since then, I’ve bought a whole heap of books but haven’t been inspired to read even one. I don’t quite understand my aversion to books these days. Especially since I still read a lot but it’s primarily blogs or online news articles.

This brings me back to Blinkist which promises, that in 15 minutes or less, I will learn key insights from the world’s best non-fiction books.

If you are shrieking in horror at this philistine approach to books, consider what the New York Times had to say about Blinkist.

‘Blinkist encourages you to read more nonfiction books. The app contains cleverly written digests — called blinks — where books are broken down into their main arguments’.

I started yesterday and all I can say is: WOW! Blinkist is the future.

Scroll down if you’re still with me to find out more about Blinkist and why I’m now such a superfan.

END_OF_DOCUMENT_TOKEN_TO_BE_REPLACED 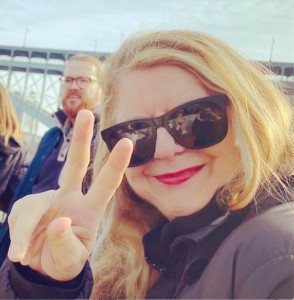 the new never gets old.

I write about trends/culture shifts, entertainment and the arts, travel and hospitality.